Bringing together the work of three leading practitioners, Hypnagogue uses hypnotherapy, storytelling and gong-healing, woven together with a live, improvised soundtrack, to take audience members on an unforgettable, transformative journey.
​Each show begins with shared intentions from the audience before a hypnotic trance is induced, after which a story is improvised using ingredients provided by the audience and accompanied by a live gong-healing and instrumental soundtrack. N.B. The show is not suitable for pregnant women or those with pacemakers and anyone who is clearly under the influence of drugs or alcohol will not be admitted for their own physical and mental safety. Hypnagogue has the power to transform all who arrive with an open heart and mind. 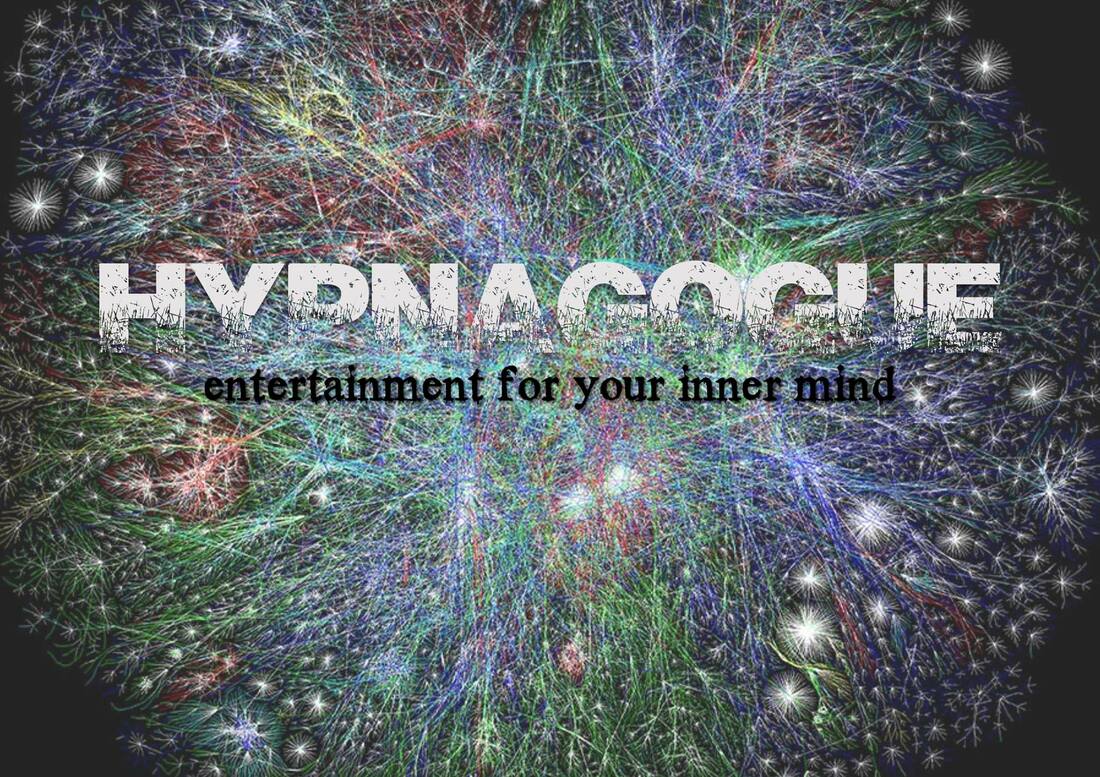 Lucid explores the conflict between a daughter fighting to keep her aged mother alive and her mother, Doris, who longs to be set free from the conscious world in which she is a prisoner of a failing body and fleeting mind. we follow her into a world of lucid dreaming and explore memory, loss and love in a  hauntingly beautiful exploration of what is left when the veil of fear is lifted.

Lucid, written and directed by Zoie Kennedy, combines stunning puppetry, visual spectacle and a haunting soundscape created by healing gongs to portray the life force and emotional journey of Doris as she faces the threshold. It fearlessly tackles the subjects of age, grief, familial ties and dependency, finding hope and beauty in the fabric of desperation and despair.

Our life-sized Bunraku puppet stripper was born in 2013 and has performed at an impressive array of galleries, festivals, clubs and venues across the UK and Europe. She has graced the stage of The Double R Club seven times, rocked the SENSATION SEEKERS stage at Glastonbury Festival, and taken Amsterdam by storm with Twice Shy's sell out fringe show. From Modern Panic's live art sermons to LATITUDE festival to exclusive nightclub The Box, Soho to Amsterdam's DITS performance gallery to London's ICA she continues to startle and delight audiences across the capital and beyond, both with her live art stage set and within the walls of the critically acclaimed TWICE SHY PEEP SHOW:
In the neon-lit twilight of the Twice Shy Peep Show strings are being pulled, but whose and by whom? A claustrophobic courtesan renders her voyeurs little more than marionettes and leaves them hanging on the edge of desire. In this sleazy den of frictional iniquity, once you have been bitten you will crave a little more.

We specialise in found spaces, love designing performances to fit site specific venues and have recently joined forces with the fabulous film maker and videographer, Gabriel Edvy, to bring the puppet lady to both small and big screen  in stand-alone pieces and interactive multi media artworks. The format of the Peep Show means that every 12 minutes a new routine is performed, with themes ranging from child marriage to the demonisation of sexually dominant women via a look at the transience of what we value through T.S. Eliot's The Wasteland, there is something for everyone to challenge and keep the audience on their toes.

This breathtaking addition to the Twice Shy Family  was co-designed with and built by Igor Studios in LA following their creature creations for 'Star Wars' and 'Where the Wild Things Are'. She is incredibly versatile as a host or walkabout character for high end parties and events as singer, storyteller, stripper or all of the above. She can be a lost little old lady or breathe the fear of God into a club crowd. She can make you laugh, reduce you to tears or turn you on in a moment. Some recoil, others still are drawn to her like a moth to a flame. Once seen she will never be forgotten!
She wowed The Sensation Seekers stage at Glastonbury 2017 as a lost old lady with Alzheimers asking for help and offering her emotive rendition of 'Creep'. She moved audiences to tears at Latitude and Modern Panic VIII with her retelling of The Rape of The Well Maidens and heart wrenching version of Tom Waitts' classic, 'Green Grass' and totally rocks the party at Wasteland, Berlin and Amsterdam!
​She is now shocking and moving the crowds in equal measure  at THE BOX, SOHO with, amongst other things, our bespoke performance art piece, 'Lady in Waiting' - a moving remembering of all we have to lose and of the lifetime of sensual memories we lock away in our failing bodies.
There is no stopping The Duchess and her latest venture for ESCHATON by Chorus Productions NYC has her locked down with her son, sharing a little too much familial love as she engages, entertains and seduces the audience in her Zoom room, The Duchess' Quarters!

SINS OF THE FATHER - starring our puppet lady and her terrifying new offspring!
​Puppet baby enthralls, horrifies and extolls the virtues of excess in this biting satire
LADY IN WAITING - starring The Duchess. A moving and terrifying look at Love and Ageing
RAISING HELL - starring the puppet baby as baby lucifer. Hell has no fury like a baby unfulfilled!
A CHILD IS BORN - our very own twisted nativity, starring puppet baby as the (innocent?) babe.
BORN TO BE WILD - The Royal baby may never be the same again as he shows his father
just how to party, BOX-style!
SLIMY BLOW-JO - The puppet lady corrupts and entices all, whatever their position.
BACKDOOR SANTA - This sexy bird can pole dance like no other...Christmas may never be the same again!
BORDER CONTROL - When all is lost, what would you give in order to regain control?

If you want to know more, you will have to come and see for yourselves - as with all work created especially for this exclusive venue, it's strictly under wraps!

​Following our original take over of MILK gallery, Amsterdam, with The Twice Shy Peep Show in 2014, Twice Shy returned to occupy DITS performance gallery in the heart of Amstrerdam's red light district for a sell out run at The Amsterdam Fringe Festival, 2015.
With 17 different pieces every night, from puppetry to video art, improvised storytelling to song and invisible theatre, this show was lovingly curated and an unexpected treat for anyone stumbling through the narrow streets of neon lights, as they found themselves complicit in the action.
​A specially commissioned piece of Graffitti art from Shaun Sepr provided the backdrop for our unsuspecting stars.

As darkness falls, Soho springs to life. Generation upon generation of dealers, drop-outs and delinquents, prostitutes, pimps and miscreants have made her streets their playground. But now a shadow looms over the underbelly of London; a shadow darker than that cast by its shady denizens. Soon the glitter in her gutter will be washed away forever and her peccadilloes will fade from the memory of all but a chosen few.

You are the few. This is her wake. Rally and weep. Laugh and remember.

Twice Shy Theatre delve into Soho’s shadows in search of her light. Mixing shadow puppetry, improvised narrative and dark, live electronic music, Soho Knows pays tribute to the Capital’s unofficial capital with stories from her past, characters from her present and visions of her future.

Zoie Kennedy is an actress, puppeteer and story-teller on a pioneering quest to explore the healing power of story.
Desmond O’Connor is a multi-award winning composer and musician.
Drew Colby is an internationally renowned shadographer who has been thrilling audiences with his work for over 30 years.
Together with a hand plucked selection of very special guests they will escort you on a shared journey whose route and destination will only be truly discovered with every step that is taken. 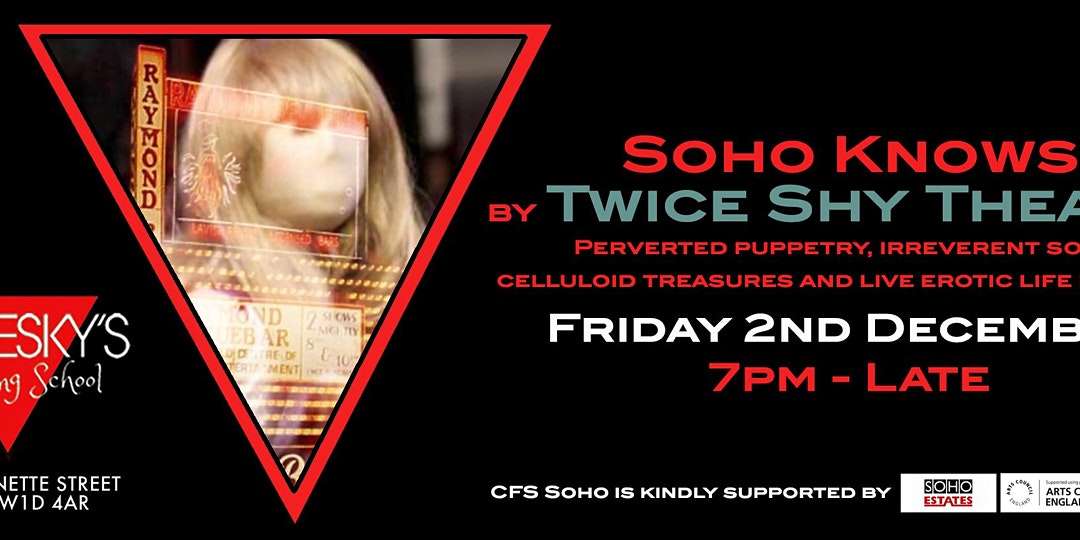 Brought to life by Dysphoria Arts, this show is a celebration of adversity and a call to action to listen to the vulnerable and transform our experience of hardship through the arts. 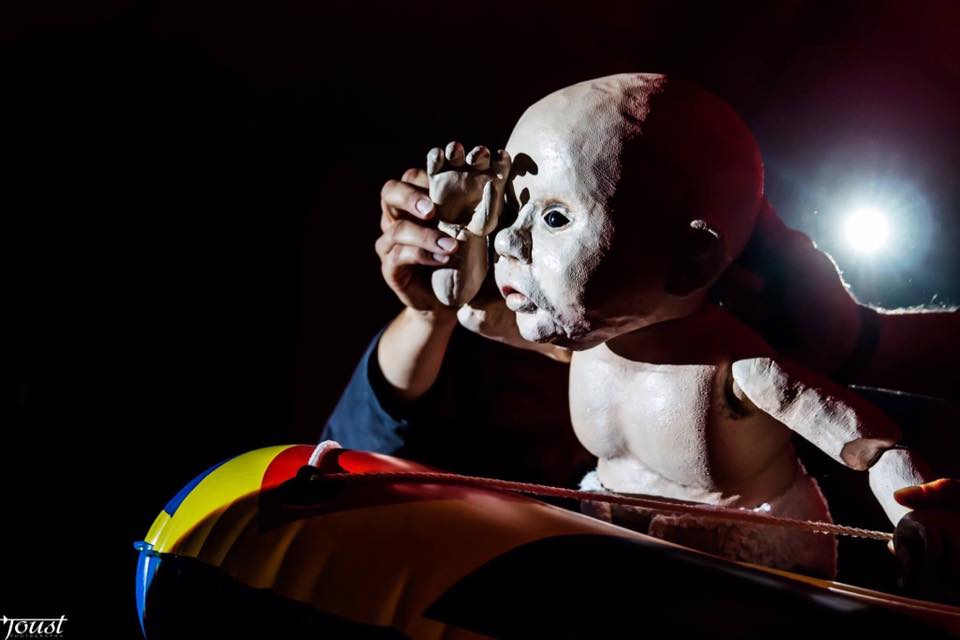 ​Puppets, performers,  activists, awakeners, storytellers, seers, musicians and magicians. A distinctly mythical perspective to viewing our age old relationship with Climate Change. A creative mirror and a call to action.
Sustainability & Environment show created for the Hospital Club, 2015 and reimagined as an immersive site specific piece for 2016. 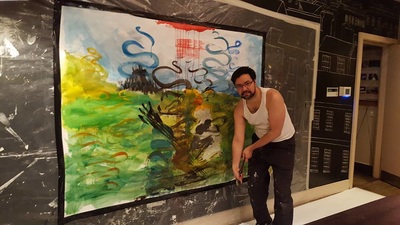 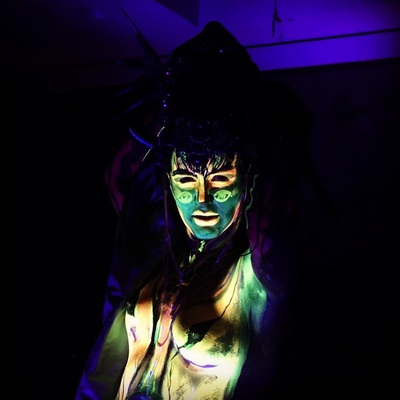 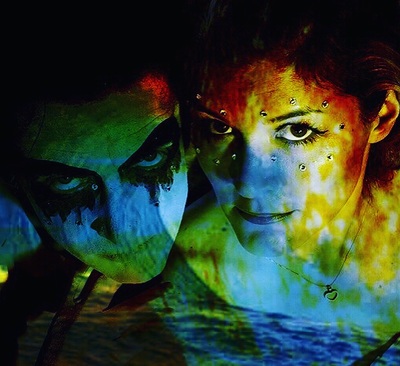 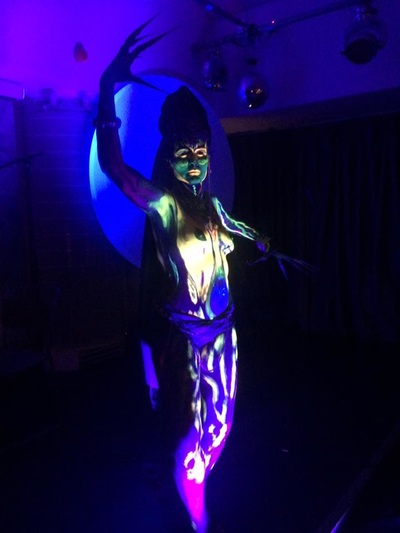 A journey through the shadowlands of story with live improvised music, story and hand shadow puppetry- in conjunction with Drew Colby, Finger & Thumb Theatre. Entirely improvised for and with the group, these storylands will feed and explore our collective fears, desires and explorations of life and death as we delve headlong into the unknown. 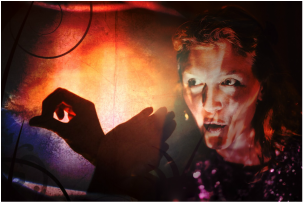 Through a brandied haze The Tinderbox is spied; its belly filled with fire, its soul filled with stories. In the corner sits an author of musical fables, flanked by dusky sirens who bewitch and beguile. These weavers of words, these keepers of secrets, these masters of the mysteries that lurk in the shadows. One spark from the Tinderbox ignites a night of twisted reverie that will seem but a dream when morning rolls around. Puppetry, shadow, music and story weave and no two shows are the same.
Often performed in conjunction with The Shadow Travellers, this show is a feast of song, story, music and puppetry.​ 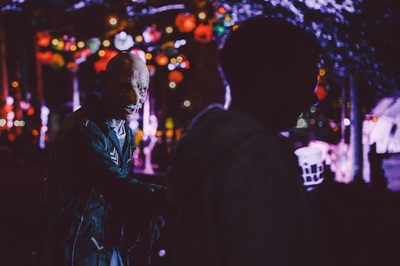 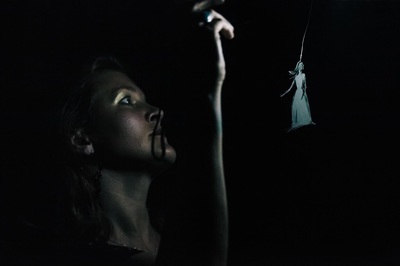 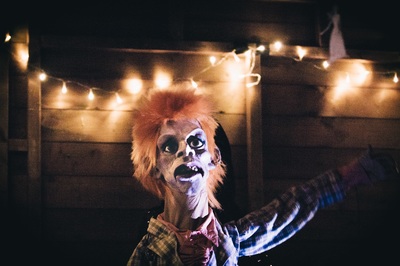 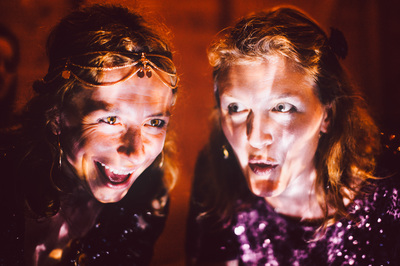 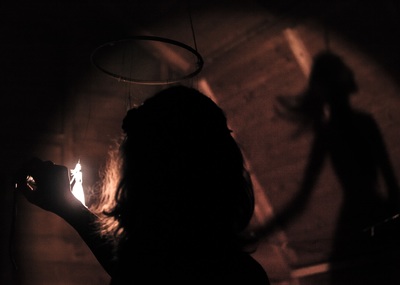 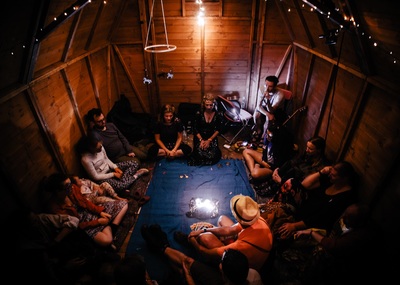 Forget everything you've ever heard about gestation, birth and beyond.
From the birth of humankind women have been giving birth to babies of the human kind. Through wars and famines, highs and lows, blistering summers and bitter winters the species has thrived and survived thanks to the most gentle and generous act of giving a human could bestow upon another. And then men got involved. Suddenly the wise ways of the midwife were rendered unenlightened, unhygienic, superstitious and suspicious. Twice Shy Theatre will lift the lid on the bubbling cauldron of pregnancy and birth in a feast of twisted puppetry, irreverent song, mesmerising movement and heartbreaking storytelling. This is a piece that will challenge what you know, teach you how to question and leave you wondering if blood really is thicker than water.

THE LITTLE GIRL WHO WASN'T THERE

Delving the shadows to ruffle the veils between worlds. ​
A feast of puppetry, song, and story with a dark and irreverant undertone. Twice Shy's founder, Zoie Kennedy and Award winning musician, composer and cabaret Legend, Desmond O'Connor, will take you on a journey to delve the depths of story and song as a means of exploring the unknowable depths of what may lie beyond and what is left behind. 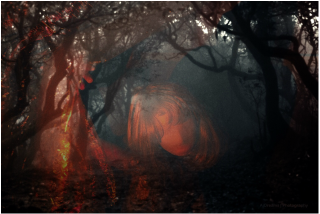 This moving and compelling new musical by Desmond O'Connor, follows the story of a tragic gender reassignment case in the 70's and the devastating effects it had on a young family.
Premiered at Latitude Festival, 2013. Original cast: Jonny Woo, Simon Kane and Zoie Kennedy.
An industry reading of the project was undertaken at THE WILD PROJECT in New York, with a view to simultaneous UK and US production.

PRETTY ON THE INSIDE

Beginning life at SOHO house, Pretty on The Inside from Dysphoria Arts is a look at alternative takes on beauty and where it may be found. Starring Twice Shy, Jonny Woo, Ruth Less & Lolo Brau & hosted by Desmond O'Connor.

Beware The Things that go bump in the night- what happens when the monstrous id is suppressed or slain. Large scale multiple puppet piece for main stage performance at The Coronet.

THE CURIOSITY CABARET:
​THE SCIENCE & HISTORY OF VOICE IN THE 19TH CENTURY

Set backstage at the Circus, 'Once Bitten' is an original musical cabaret-theatre piece written, produced and devised by DESMOND O'CONNOR and ZOIE KENNEDY. It looks at performance and identity; scarring and loss; and our communal descent into the world of the clown. The piece will be dynamic and changing as it progresses, with various incarnations co-existing, as a cabaret theatre event, a more narrative-led theatre piece and as an art installation.

"Once Bitten...is the theatre that cabaret has been threatening to make since the neo-burlesque revival sneaked vaudeville in the back door... plays the traditional cabaret structure like a choreographer using ballet technique, as a foundation for a meditation on failure, love and insecurity"
​Vilearts, Glasgow ****